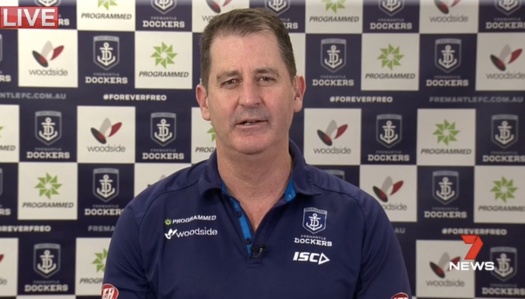 Last weekend, former Brownlow medallist and now 6PR radio disc jockey Brad Hardie revisited a claim from five weeks ago, that Dockers coach Ross Lyon – or, more specifically a “third party” connected to Lyon –  reached out to the Pies for a coaching gig in 2018. As you would imagine it playing out in the media, a fuming Lyon responded by saying it was a “complete fabrication and a falsehood.”

Pies coach Nathan Buckley, who, if Hardie is right, doesn’t know yet that the Pies are looking for a new coach, wants Hardie’s AFL media accreditation ripped off him for telling untruths. Hardie’s claims also drew fire from Dockers CEO Steve Rosich who has a policy of not responding to innuendo, but felt he needed to douse water on a fairly serious allegation. How this plays out in the following weeks will be intriguing, in a soap opera kind of way, but all we really want to know: who is telling the truth?

Hardie’s comments have implicated three parties and you can see how it has ruffled feathers. But how true are his claims? And who is the third party? There’s no evidence or fact to back up this claim making it difficult to believe, but we definitely can’t rule it out. Why would Hardie invent such a story if there isn’t truth toward it? Why would he fabricate this story? Hardie has more to lose than anyone here – like his job, his credibility, his reputation. But part of his job, the part we can’t verify, is how solid is the information he received about Lyon? We have to believe that part of what Hardie has said has truth to it, otherwise why would he a) say it and b) stick to his guns? And of all the people for Hardie to say these things about –  Lyon –  it’s plausible to think Lyon is capable of doing what Hardie claims he did through a third party.

In 2008, during the winning Saints days, Lyon was busy crafting his way to being the most winningest coach in the Saints history. There were the Preliminary finals, the Grand Finals. The elite All-Star cast in Hayes, Montagna, Riewoldt, Ball, Goddard and Dal Santo. And there was Lyon’s eventual 76-41-4 record. The Saints era put Lyon on the map and made him god-like at Moorabbin. But the one code Lyon couldn’t crack was how to win a Grand Final with a decked out team full of ball winners. Sure, three Grand Final appearances (including the draw) look great on a CV, but Lyon was paid to win those. And he didn’t.

For a coach, not winning premierships means goodbye. Sometimes the club’s board pulls the plug first. Other times it’s the coach that senses his time is up and they jump ship or a rival club makes good on an offer at the right time and snags their guy; and that’s what happened with Lyon. The Saints were on a downward curve. And not long after the Saints fell to a gritty Swans outfit by 25-points in the 2011 Elimination Final, Lyon, inked a deal to coach the Dockers in 2012. The problem though was that Mark Harvey, who was the head coach of the Dockers at the time, was unaware he was being replaced until he got word he was being replaced. The Dockers head-hunted Lyon behind closed doors and without consultation of Lyon’s management; once the whole thing became public, it caused a media shit storm. In light of Hardie’s allegations, it’s worth considering that Lyon has a track record of this stuff. It’s not lengthy, but, still a track record all the same.

It doesn’t help matter that the man Lyon is supposed to be replacing  – according to Hardie – hasn’t been traveling well this year. Buckley’s Pies in 2017 have been middling. The Pies aren’t the machine they once were and even Buckley acknowledges that. He’s been stoic in the face of media speculation he could be out of a job shortly.  But Hardie’s suggestion that Lyon was potentially going to replace him is news to him. It’s also news to Eddie McGuire. The most interesting thing about the Pies’ stance, is that neither Bucks or Eddie directly answered the allegation of the third party claim. Eddie said “has Ross Lyon spoken to Collingwood about wanting to be the coach of Collingwood or has Collingwood spoken to Ross Lyon? Definitely, unequivocally no.” This leaves some doubt that perhaps a third party did contact the Pies because it surely wasn’t Lyon. This is a burning question that still needs answering.

For now, without proof, Hardie’s claims are rightly coined as innuendo. And no-one likes innuendo. It’s pointless and damaging. You can’t make claims and not back them up. But I can’t help think about Lyon’s rather prickly reaction to all of this. It doesn’t look good. But, he has a good poker face. And, the other question still not answered is did a third party contact the Pies?  For the sake of Hardie’s career, if he can’t prove or tell us who the third party is and that they made contact on behalf of Lyon, then his integrity and radio truths are shot.

THE FIFTY is an AFL journal that was founded by a group of writers in 2017. Its aim is to celebrate the game of football and its culture through good writing. We hope to emerge into an open and disparate publication for the thinking football fan. You won’t find breaking AFL news here. There are other spaces for that.